We’ve only reached the midpoint of December, but there are so many events and pictures to share that I’ve decided to do two December Happenings, lest readers become exhausted by the fun photos of all of the holiday festivities of the month. It turns out that, although we’re all exceptional gardeners, we also specialize in enjoying each other’s company.

EAGC kicked off the month by serving as Grand Marshal of the famed Exeter Holiday Parade, held on December 3. Although the day was rainy and gloomy, Mother Nature smiled on us and the rain stopped just as we lined up for the parade. We donned our Dollar Store finery and led off a long parade to a surprisingly large crowd of very merry parade viewers. It turns out that un-Christmas-like weather doesn’t deter holiday fans.

Betsy’s annual Holiday Swap Shop Party was memorable as always. In fact, attendees agreed that this year Betsy outdid herself with her finely curated selection of swap shop “gifts.” If this year’s party were to have had a theme, it may well have been toilet-related. (In fact, that seemed to be the theme of her 2021 party as well.) Enjoy the treasures:

In addition to supplying all these stunning gifts, Betsy also had a spectacular spread of goodies, including lots and lots of her meticulously decorated cookies. A fun morning for all who attended – much laughter and many calories!

There’s much more to come. Watch for December Happenings – Part Two, available in your inbox in early January.

Thank you to my inveterate photographers, Ann H. and Patti Smith!

The big news of June is the Annual Luncheon and Auction and we have some great photos of this year’s event, thanks to Ann H. Our attendance this year was up substantially from last year, and auction plants flew off the tables, compliments of Max’s auctioneering skills. Jill C and the Hospitality Committee made it all possible. Here are some of the hightlights…

Mark your calendar for our summer get-together on Thursday, July 18, at 11 a.m. at Prescott Park in Portsmouth. Go to the website Calendar for more details.

If you have any photos of your gardens that you’d like to share, email them to me (LuAnn) at my home email or to eagcnh@gmail.com. I’ll post them periodically through the summer for all to enjoy.

Five members enjoyed a wonderful field trip to the Butterfly Place in Westford, MA  on August 9. Linda V took pictures so we can all enjoy the beauty. Can you identify any of these butterflies? 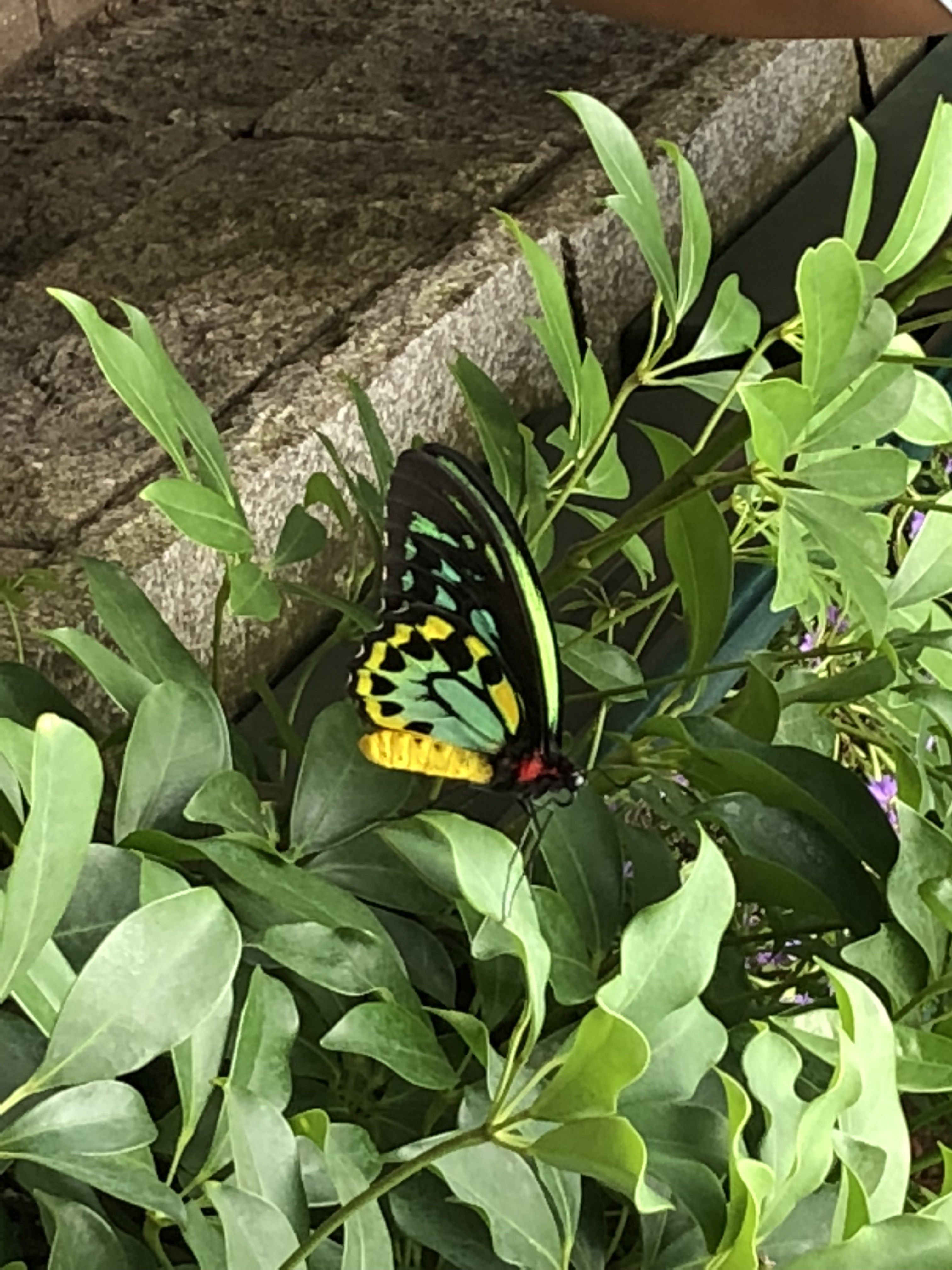 If you can’t identify this next butterfly, you haven’t been attending our meetings!

The twenty-five members who attended our August 16 Meeting/Luncheon enjoyed sharing this summer’s gardening experiences (too hot & humid!), loads of delicious food, and had the opportunity to get acquainted with some our new members. As you can see by the pictures, there was no shortage of eats or laughs. Thanks to Nance J for photographing the fun and to Susan for providing her beautiful home. 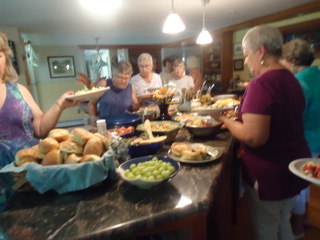 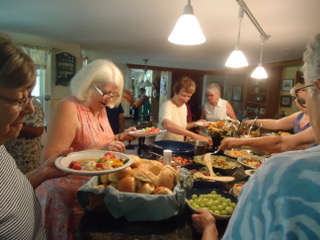 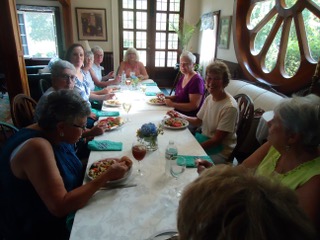 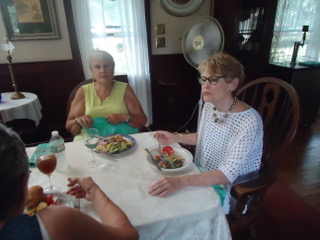 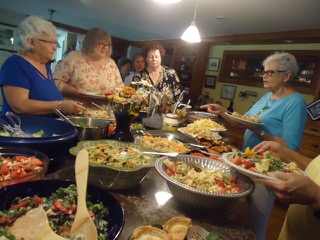 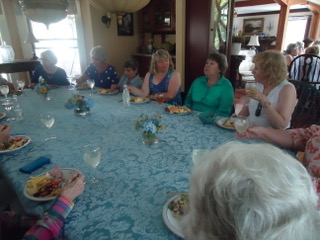 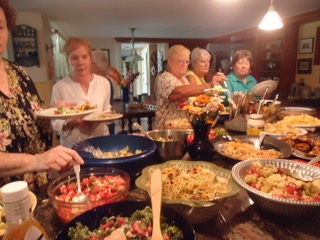 We are so pleased to welcome these gardeners, who have joined us in the past few months:

Be sure to introduce yourself to them at the September General Meeting!

Make sure you’ve marked your calendars for our season kick-off General Meeting. We’ll be gathering at the Stratham Municipal Center between 9 and 9:30 on Thursday, Sept. 20. Find out what’s in store for the next nine months and pick up your hot-off-the-press 2018-19 Yearbook.

Today’s high temperature calls for that time-honored question: “Is it hot enough for you?” Or maybe I could ask, “Is it hot here, or is it just me?”

Dianna braved the heat to take a few pictures of her gorgeous garden and has shared them with us.

​Dianna comments,  “The ‘rock wall’ flower bed contains many flowers from our EAGC auctions, which makes it one of my favorite beds. The big blue pot is from Betsy, aka Swap Shop, bleeding hearts from Susan, beautiful red Japanese maple from Nancy P, evening primrose from Nance, spotted leaf plant from Carole, Canadian ginger from Connie, etc.”

LuAnn also has a few shots from her garden: 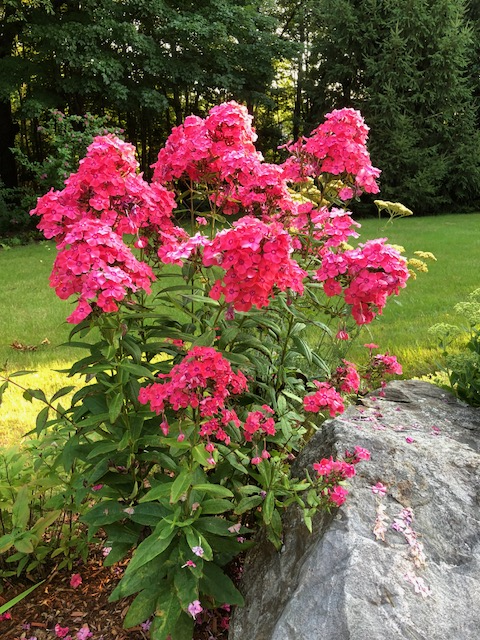 LuAnn says, “This is my favorite shade of pink. They really brighten up a garden. These phlox are a hybrid – so very little mildew.” 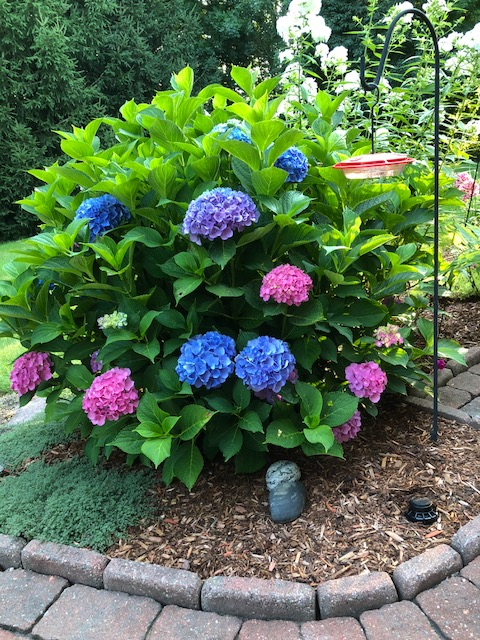 ​“Every year, this hydrangea produces at least 3 colors of blooms. This year is a bonus year for blooms, but they’re mostly on the lower part of the plant and none is on its north or west side.” 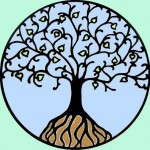 Here’s a new Promise Tree leaf that sounds really tempting! This is from Edie:

Tired of weeding your garden? For a $20 donation to the Promise Tree, I will weed your garden for 2 hours. To call me to schedule a time, click here: Edie

Lee’s offer of  Iris bulbs is still available too. She’ll have them available at the Meeting/Lunch on the 16th at Susan’s home.

Speaking of the August Meeting/Lunch – it’s at noon on Thursday, August 16th, at Susan’s beautiful home. If you haven’t already, please call her to let her know you’re coming and what dish you’ll be bringing.  As an added bonus — we’ll have a chance to get acquainted with some of our newest members!

An informal Summer Meeting had been scheduled for next Thursday, July 19. Unfortunately, this meeting had to be cancelled, but Susan C. will be hosting a lunch/barbecue meeting at her home on Thursday, August 16. Watch your email for further details!

The June Board Meeting includes both the current Board and the new, incoming members of next year’s Board. This is the meeting where next year’s plans are discussed and new Board members are familiarized with their upcoming jobs. Of course none of this happens without good food, so the new Board members were treated to a potluck brunch. Here are a few shots of the action. (Sorry, no food photos!) 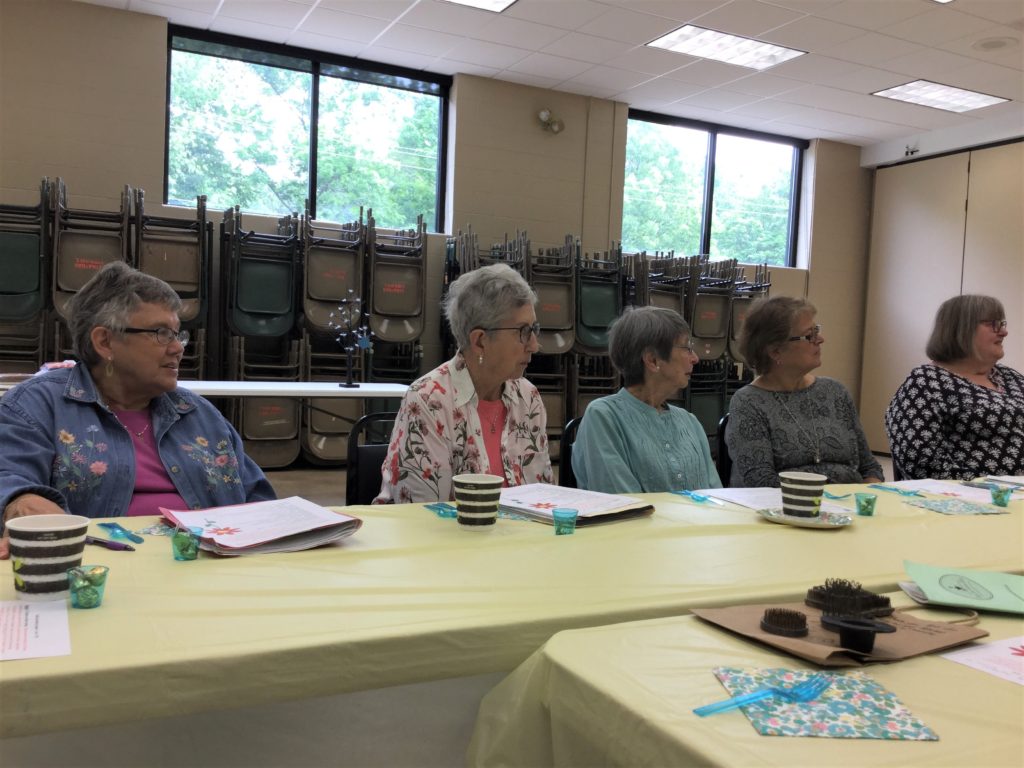 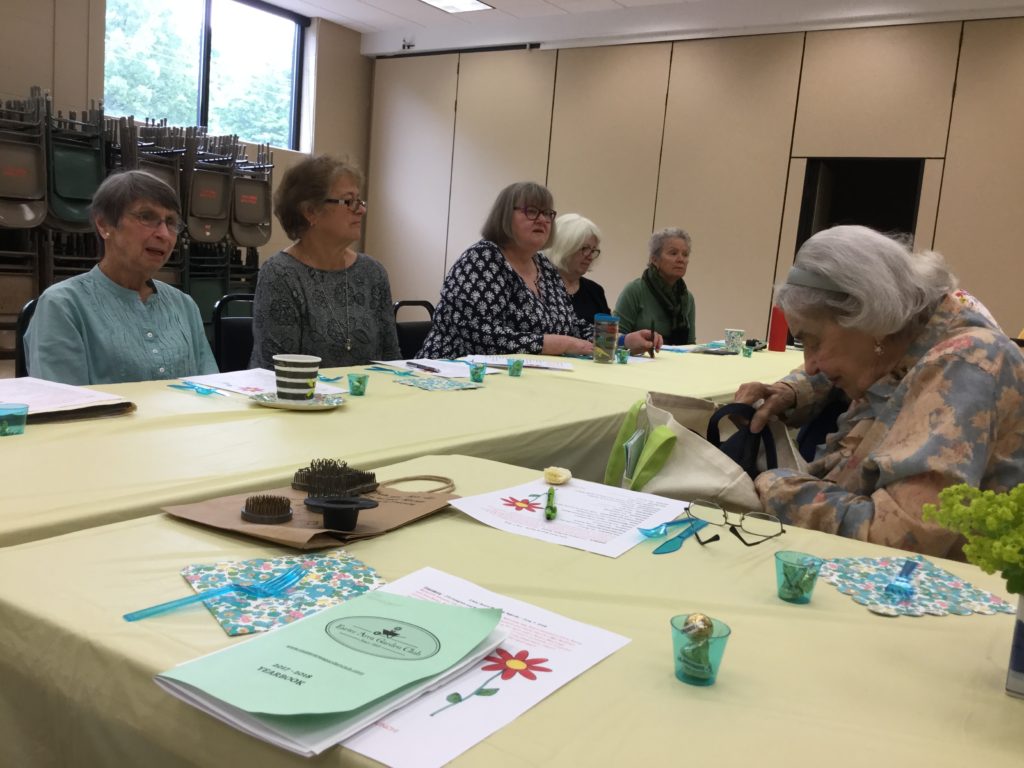 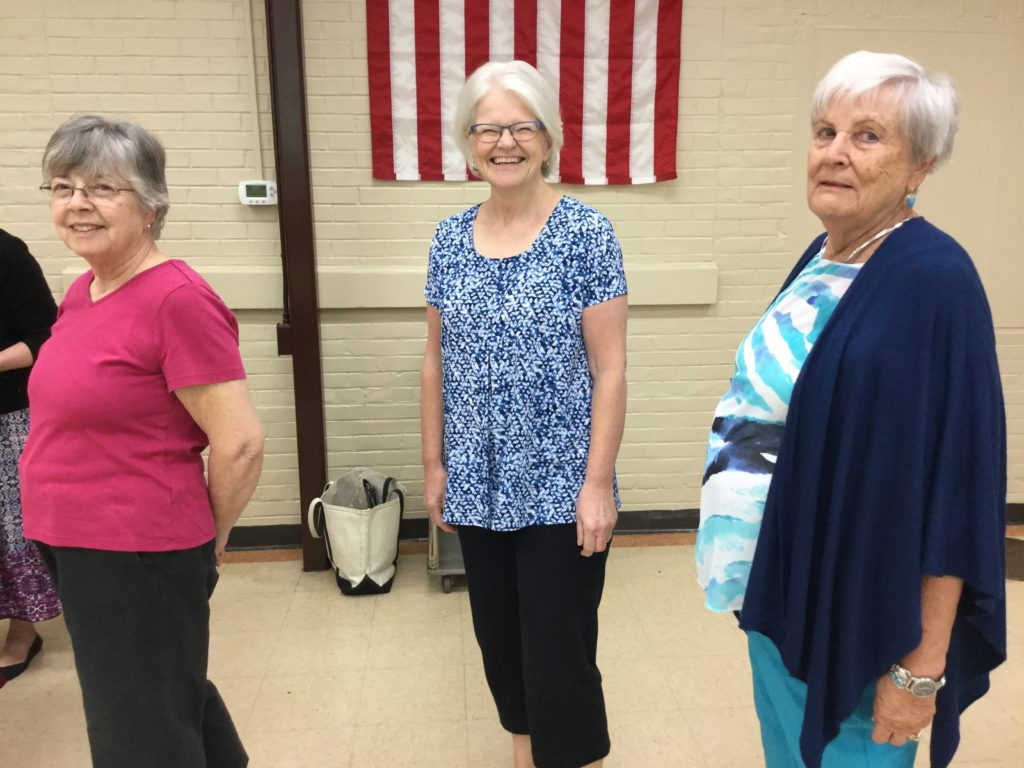 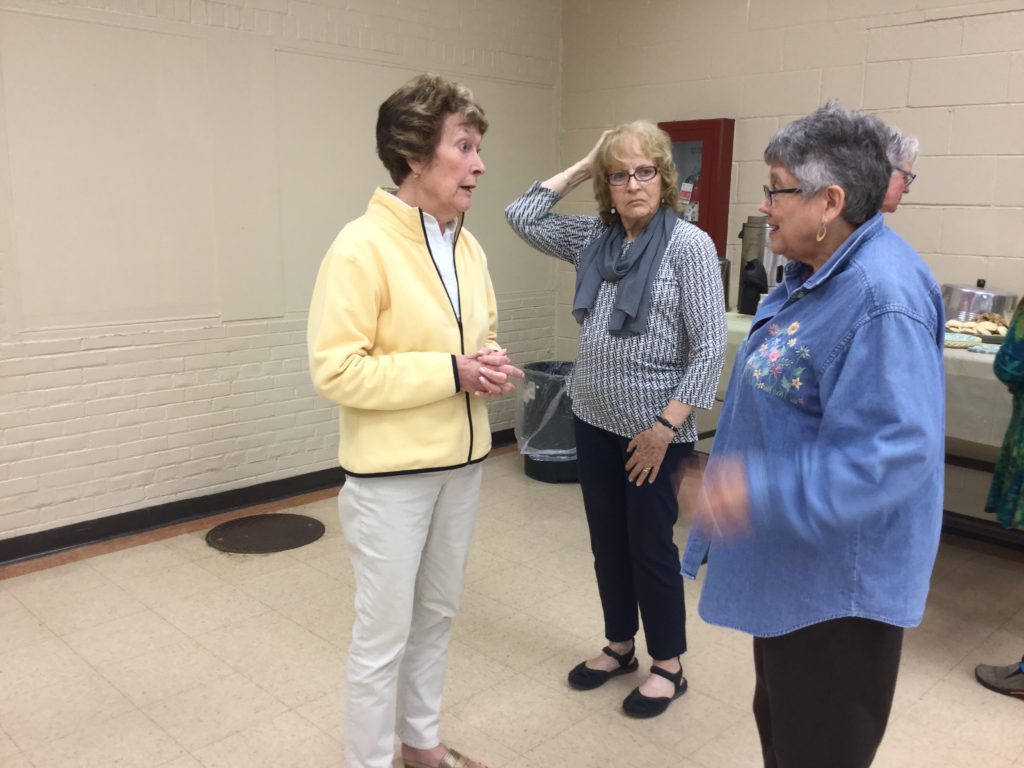 The big news for June was our festive June Luncheon and Plant Auction, held at the Portsmouth Country Club, with 44 attending.  As always, members and guests were able to bid on lots of happy, healthy plants which had been nurtured and donated by fellow members. Max performed admirably as auctioneer again this year – whipping through dozens of plants with efficiency and a hefty dollop of humor. We added $849 to our treasury thanks to the plant sales. 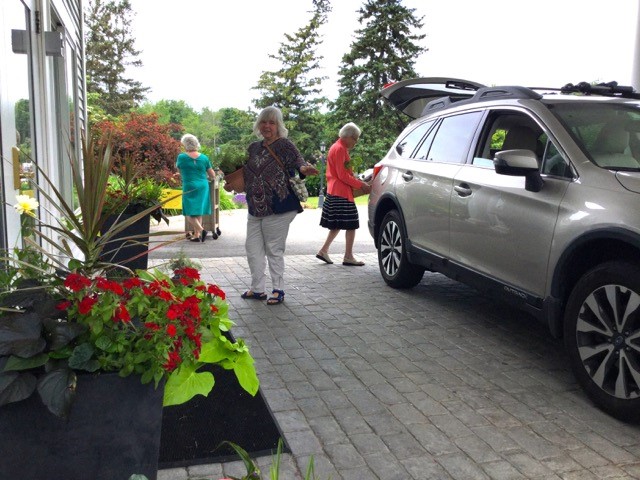 Plants (and Auctioneer Max) arriving for the auction.

Betsy A. and her Hospitality Committee arranged for a delicious buffet luncheon and lovely table settings, including handmade centerpieces which were raffled off to some happy winners. The Environment & Conservation Committee provided two spectacular baskets packed full of gardening items, one of which was awarded to the member who brought her own coffee cup to the meetings most regularly – a great way to emphasize the “conservation” part of this committee’s goal.  In total, the various raffles brought in almost $125 for our club. 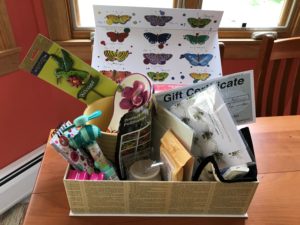 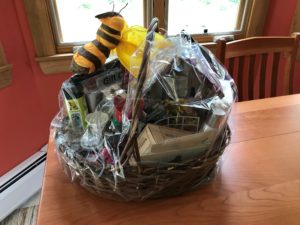 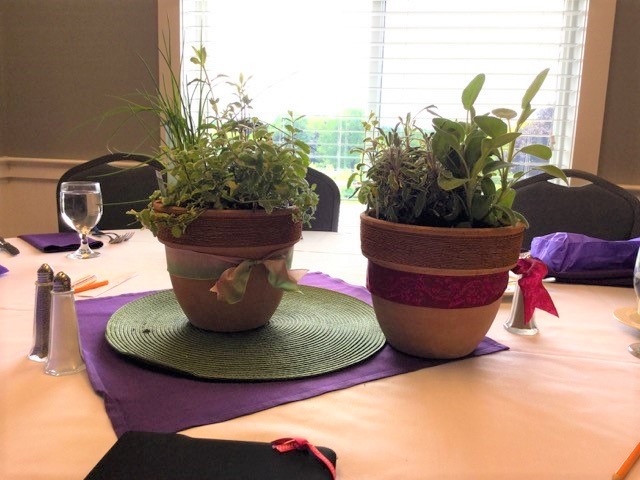 The luncheon culminated with the installation of  our club’s new Executive Board and the grateful acknowledgement of  outgoing Presidents, Jill and Betsy and Vice-President Mel, for jobs very well done.  Anne C. performed the installation of new officers, presenting each of the five board members with a plant to symbolize their individual responsibility to the club. 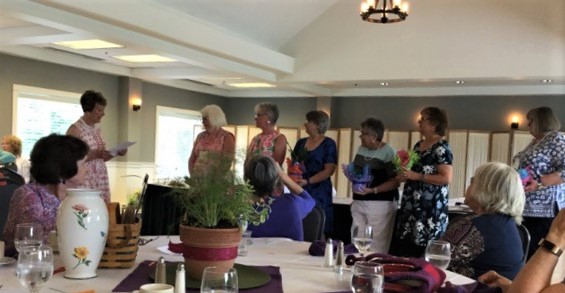 A list of  the full Board, including Committee Chairs, can be found on the website under “Members Only“. (While you’re there, check out some of the other interesting members only info available to you.)

Our new Executive Board: Susan, president; Linda S, vice-president; Vicki, recording secretary; Florence, returning as corresponding secretary; and Jill, treasurer. (All the distractions of this fun event made a better picture impossible!) 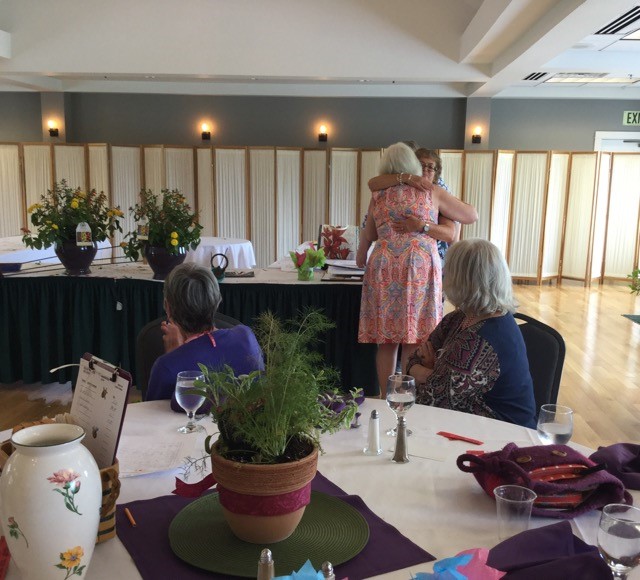 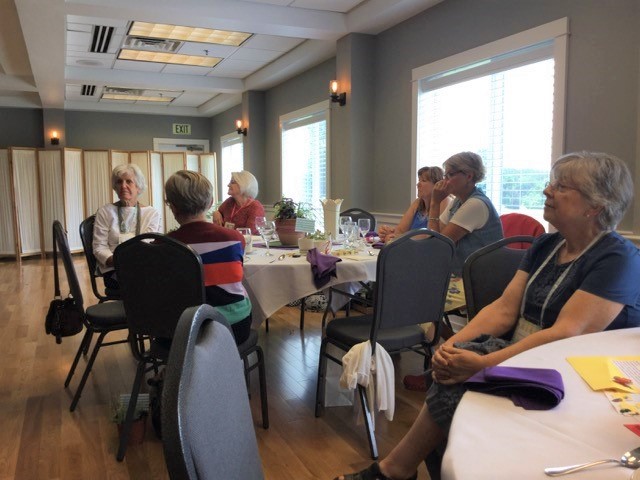 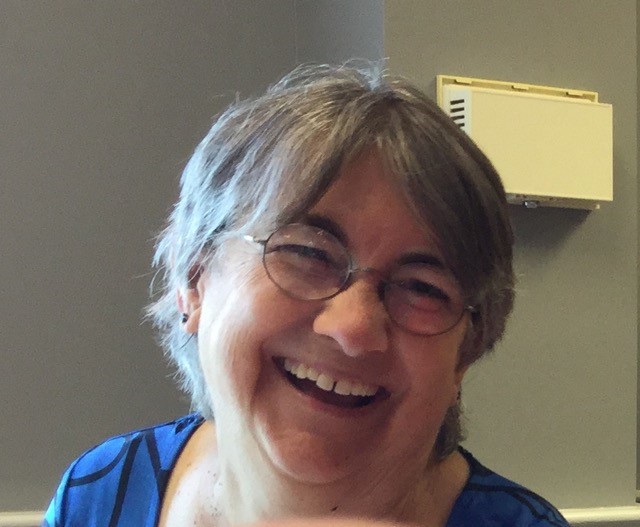 Members of our club have been invited to this interesting and timely presentation:

Please join the Piscataqua Garden Club on Thursday, July 19, 2018 at 10:30 am at The Reading Room, 491 York Street, York Harbor, Maine, for a presentation on the impacts of climate change, “Preparing for Sea Level Rise” , by Gayle Bowness, Science Education Program Manager, Gulf of Maine Research Institute.

We have all noticed the increasing news coverage of intense storms, unusual temperatures, ocean warming and coastal flooding. As these issues become more prevalent in our daily lives, it is becoming more important to understand the impacts of these events – today and in the future. Ensuring the region’s resiliency to climate impacts, such as sea level rise, requires a scientifically informed and engaged public.

Join us for an interactive presentation to explore the data behind sea level rise. Together, we’ll review models projecting impacts in your community and case studies of resiliency from across the globe.

Gayle Bowness, a Nova Scotia native, with a B.S. in Marine Biology from Dalhousie University and a M.S. from Lesley University in Ecological Teaching and Learning will lead us in this experience. Gayle and her family have lived in Cape Elizabeth, Maine for 14 years where they enjoy exploring the state’s coastline. She has been working at Gulf of Maine Research Institute since 2005. As a pioneer in collaborative solutions to global ocean challenges, Gulf of Maine Research Institute, located in Portland, is dedicated to the resilience of the Gulf of Maine ecosystem and the communities that depend on it. Gayle has designed and delivered a variety of education programs, from watersheds to electrical efficiency and is now focused on sea level as the impacts of climate change become increasingly visible.

Understanding more about this timely topic seems to have become a priority of younger generations which we hope captures their and all interested guests’ attention to participate and engage in this event.

Open to the public. Suggested donation $5 at the door.

Lee C. has added a Leaf to our Promise Tree: 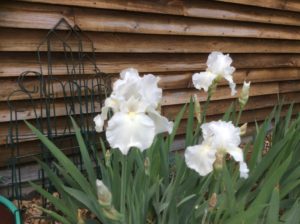 ⇒ Iris — Baby blue to white, sometimes fall-blooming. They grow to 2 1/2 to 3 feet tall. Three dollars a pot while they last. Email Lee to arrange pickup.

Are you new to the club or need a refresher on how our Promise Tree program works? Click here for details!