There is Always Some Damn Thing…

I happen to have both juniper and crabapple trees in my yard that usually look quite beautiful. The crabapples were especially pretty this year. Not especially pretty were the orange “mushrooms” infesting my juniper. Upon investigation I discovered that cedar/junipers and apple/crabapple trees can be an unfortunate combination. Wikipedia offered some enlightening information. And yes – I did notice spots on my crabapple leaves last year. 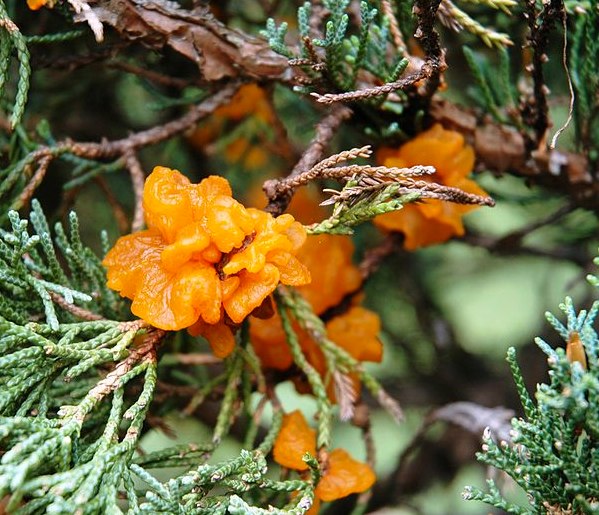 Gymnosporangium juniperi-virginianae is a plant pathogen that causes cedar-apple rust. In virtually any location where apples or crabapples (Malus) and Eastern red-cedar (Juniperus virginiana) coexist, cedar apple rust can be a destructive or disfiguring disease on both the apples and cedars. Quince and hawthorn can substitute for the apples as hosts and many species of juniper can substitute for the Eastern red cedars.

Here is a chart of the disease life cycle. As they say, it takes two to tango. 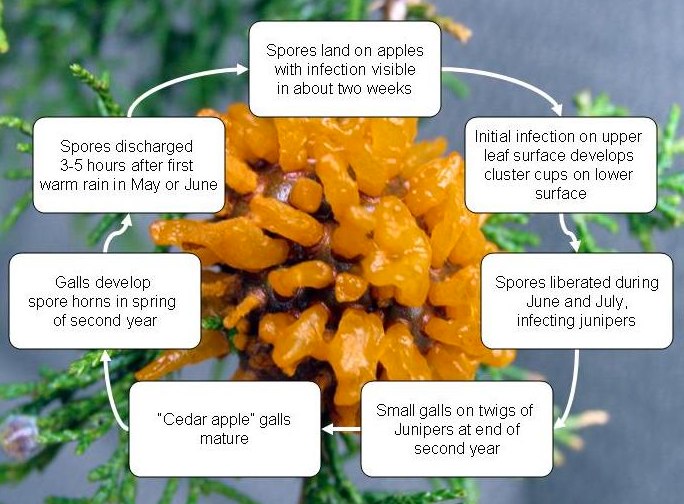 Is There a Remedy?

Fungicide sprays applied in a timely manner are highly effective against the rust diseases during the apple cycle. Most sprays are applied four times at 7 to 10 day intervals, starting with pink bud on crabapples. These applications are to protect the apples from spores being released from the cedar host in mid-spring. If cedar apple rust disease is diagnosed on apple fruits and leaves it is far too late to spray. (That would be mine, I think!) Systemic fungicides are available.

Fungicides listed for use on apples can be used in July and August on the cedars to reduce infection. Application of fungicides to the junipers before and while they are in the infectious orange gelatinous state seems to reduce the severity of the outbreak.

I best be looking for that Fungicide stuff. Meanwhile, I have trimmed up the juniper and snipped off some of the obvious galls. The “jelly” has melted away in all this rain and the tree actually looks OK, for now…..