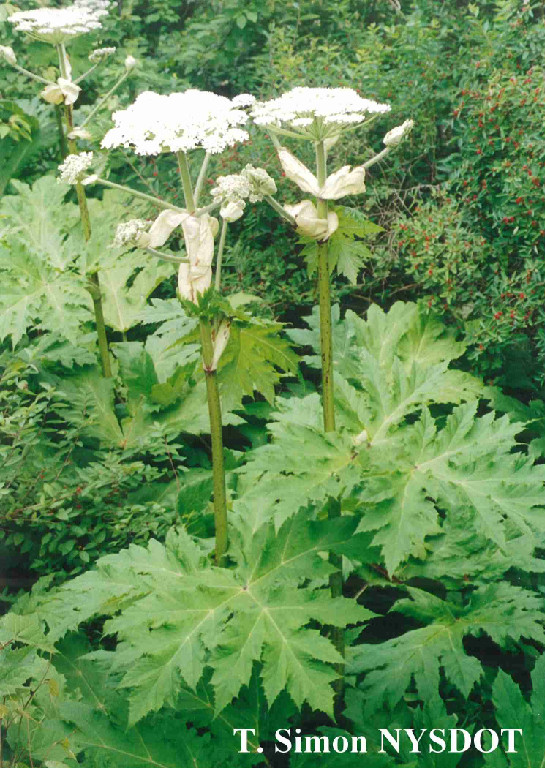 Called giant hogweed, this particular plant has sap so poisonous that the US government officially decreed it a “noxious species” in 1983, preventing its sale and importation. Unfortunately, it’s already here — and hard to get rid of.

If you come into contact with the sap of a giant hogweed plant and then expose yourself to sunlight, the sap will cause your skin to blister so badly that it’s potentially as dangerous as having third-degree burns.

Oh — and one other thing — if the sap gets in your eyes, it can cause blindness.

Initially the hogweed went through a “lag phase” (a botanist’s term referring to a period of slow spread). But that has ended. In New York State and other parts of the US, this “giant alien” is spreading and an increasing number of people are coming into contact with it. To learn more about the dangers of giant hogweed, I spoke with both Antonio DiTommaso, PhD, associate professor of weed ecology and management at Cornell University in Ithaca, New York, and Melissa A. Bravo, Pennsylvania Noxious Weed Program manager, a nationally recognized expert.

Ironically, giant hogweed was purposely brought to the US from Europe early in the 1900s because it was thought to be beautiful. The plant was valued by horticulturalists and was used in many ornamental gardens despite the fact that not only the stems but also the buds, seeds and roots have high concentrations of the toxic sap. It Hurts! According to Dr. DiTommaso, giant hogweed is dangerous to anyone and everyone — “it’s not like poison ivy in that some people aren’t bothered by it.” We discussed how the plant grows and spreads and what people need to know to stay safe.

When it appears: Small leaf clusters sprout in early spring. By late summer, the fruit and seeds form structures that resemble upside-down umbrellas (“umbels”). These release seeds that disperse long distances on the wind or in rain run-off. The seeds can stay dormant in soil for up to five years.

Where it appears: Giant hogweed thrives in cool, wet places and rich soil — such as near garbage dumps, ravines, roadways, streams — and, of course, around many homes and gardens.

What it looks like: Giant hogweed’s most notable physical characteristic is its towering height — it typically is at least eight feet tall when in flower and has been known to grow as high as 15 feet. Also notable are the umbrella-shaped flower clusters. The leaves are extremely large and deeply incised (“fernlike,” according to Dr. DiTommaso) — they measure up to five feet across. The stems are distinctive, too — hollow and ridged with large purple blotches and coarse white bristles that are especially dense where the leaves branch out from the stems. What’s really bad: The hollow stems are appealing to children, who use them as blowpipes, pretend telescopes or in “sword play,” leading to burns and, as noted above, even causing blindness.

Why it’s dangerous: It’s the highly concentrated sap that makes giant hogweed so caustic even in young plants. The reaction — blisters — occurs when skin that has been touched by the sap is exposed to sunlight, typically within 30 minutes to two hours. You’ll be left with a problem called photodermatitis, meaning that the affected part of your body will develop a painful rash when exposed to sunlight — sometimes for many years after your initial exposure.

If your clothing, but not your skin, touches it: Launder clothing that may have come into contact with hogweed sap with laundry detergent and water, being sure to use gloves to pick up the clothes. Do not mix the contaminated clothing with other clothing during washing.

If your skin touches it: Wash the affected area — using cold water only, no soap, because soap can drive the toxin further into the skin. And remember to cover up if you are going to be exposed to sunlight. Bandages or long sleeves or even sunscreen will slow the reaction. Should the blistering and rash become intensely painful, consult your doctor and indicate that the reaction you have is a burn and should be treated as such.

If you get the sap in your eyes: Rinse your eyes immediately with cold water, put on a pair of sunglasses and have someone drive you to an emergency room or, at minimum, to a doctor to determine whether you need treatment.

If You See Something, Say Something!

Should you happen to encounter a giant hogweed plant, don’t touch it. Take a photo of it and send it to your local authorities (in most states, this will be the environmental conservation office or cooperative extension office). It will likely take multiple applications of herbicide over a course of several years to make 100% sure the problem is solved.

If you find this plant on your own property, you may be tempted to deal with it yourself. Please don’t. Giant hogweed may have a silly-sounding name but what it does isn’t funny at all.