Cranberries reach their peak and are ready for harvesting in the fall, starting around mid-September until around mid-November. These beautiful, tart little jewels grow on long running vines in bogs. A bog is an area of soft, marshy ground with acid peat soil, usually near wetlands. They can be found all over North America, from Massachusetts to New Jersey, Oregon to Washington, Wisconsin, and parts of British Columbia and Quebec.

There are two ways to harvest cranberries – Wet & Dry

Because the berries are often seen floating on top of the water, many people think that cranberries grow under water. This is just the  result of wet harvesting. The bog is flooded the night before the berries are to be harvested.  The growers then use water reels, nicknamed “eggbeaters,” to churn the water and loosen the cranberries from the vines. Each berry has a tiny pocket of air that allows it to float to the surface of the water. From They’re corralled together, loaded into trucks, and shipped off for processing. It is wet harvested berries that are used to make commercial products such as cranberry sauce and drinks. 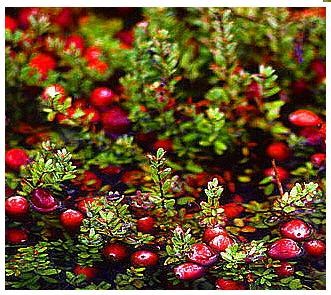 Fresh cranberries, found in the produce aisle every fall, are harvested using the dry method. For this, cranberry growers use a mechanical picker that looks like a large lawnmower. It has metal teeth that comb the berries off the vine and deposit them in a burlap sack at the back of the machine. Helicopters are sometimes used to transport the sacks to protect the vines from the traffic of heavy trucks.

Of all fruits, only three – Blueberries, Concord Grapes and Cranberries can trace their roots to North American soil.

Cranberries were first used by Native Americans, who discovered the wild berry’s versatility as a food, fabric dye and healing agent.

The name “cranberry” derives from German and Dutch settlers’ name for the fruit, “craneberry”, so called because the small, pink blossoms that appear in the spring resemble the head and bill of a Sandhill crane. Also, these birds were observed wading through bogs foraging for cranberries, one of their favorite foods.

American whalers and mariners carried cranberries on their voyages to prevent scurvy.

There is a dispute as to whether or not cranberries were served at the first Thanksgiving. Some say nay because the settlers would have found them too bitter to eat and there was no sugar available in those days. Others say aye because the Native Americans were known to have sweetened them with with honey.

A favorite Native American staple was “Pemmican”. Mashed cranberries were mixed with with dried deer meat and animal fat. It was a high-energy, spoil-resistant survival food.